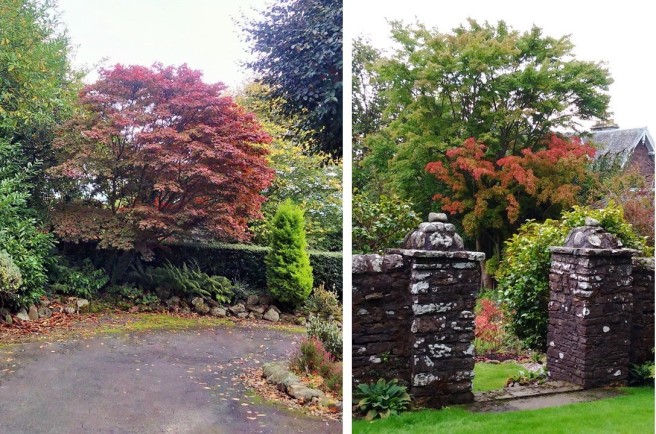 Looking down the driveway from my office window I can see the wonderful shades of an Acer tree. As the seasons change the foliage turns from bright, lush green in spring, to more coppery tones in summer and now, the leaves are shades of rich red and brown.

There is still a lot of green in the garden, but now that the pinks and blues of the summer borders have faded, it is the time of year when the reds flowers and shrubs really stand out.

The fine specimen above was planted last year and has been producing flower stems for several weeks. It’s still going strong, adding a splash of colour to a flower-bed which was alive and vibrant with lupins a few weeks ago. The Antirrhinum is a nostalgic plant for me; we had them growing in most of my family gardens as I grew up. I used to think that the flower heads looked like little faces staring up at me from the borders.

The Fuchsia bushes have also been in flower for a while. This dainty variety grows in front of a magnificent Cotoneaster horizontalis, which is splayed out against a wall. Together the two plants look very bright and bold, one in front of the other. The Cotoneaster is laden with berries which tend to stay in place throughout the winter – for some reason the birds aren’t that interested in them.

Another later flowering plant in the garden is Lyceteria, more familiarly known as Pheasant Berry. Occasionally there has been a pheasant in the garden but I have yet to see one anywhere near this bush. The unusual flowers last a long time, and look like a succession of dark red lampshades hanging from a thin red cord.

Apart from the flowers and foliage, there is also red colour from late ripening fruit. The Autumn raspberries are not as prolific as the earlier variety I grow, but it is lovely to be picking berries at this time of year. The last of my blueberry bushes is in fruit, but it is the leaves and stems that offer so much at the moment; on a dull day, the vivid red is a sight to behold. The little red apples were picked just after I took the image. Just five small fruit on a miniature tree, but crisp, sweet and delicious with every bite.

To finish my red-themed post this week, while I was taking these pictures, I came across two aptly named butterflies having a bit of a stand-off on the white Hydrangea bush. One clapped its wings together as soon as I got the camera out and couldn’t be tempted to open them again. The other fellow was more obliging and sat there for quite a while as I clicked away. It wasn’t until later on that I realised the poor thing only had one antennae. Until next time, enjoy the Autumn shades 🙂